CoEJ Mourns the Passing of an Inspiration

It is with deep sorrow and profound grief that the Council of European Jamaats shares the news of the demise of Ayatullah Sayyed Muhammad Al Hakeem.

Grand Ayatollah Sayyed Mohammed Saeed al-Hakeem, one of Iraq’s top Shia leaders, passed away aged 85 in the southern Iraqi holy city of Najaf on Friday, 3 September 2021 and was buried on Saturday, 4 September.

At the time of his death, he was one of four Ayatullahs of the Hawza, Najaf’s Shia seminary, along with Grand Ayatollah Ali al-Sistani.

Sayyed Al-Hakeem has written many books and publications, some of which were translated into several languages. He is survived by a wife and eight children.

Sayyed Al-Hakeem was imprisoned between 1983 and 1991 under the government of Saddam Hussein who feared neighbouring Iran’s 1979 Islamic revolution would set off “a similar event” in Iraq,

Sayyed Al-Hakeem made great efforts to be involved in community and world affairs. In recent times he met with:
– the Food and Agriculture Organization of the United Nations
– a group of orphaned children of the martyrs of the Popular Mobilization Forces
– the Swedish Ambassador to the OIC and called the International Community to Block the Sources of Terrorism and Extremism

Sayyed Mohammed Saeed al-Hakeem has also praised the sacrifices of the oppressed freed female  prisoners of the Shiite Turkmen and Shabak, who were subjected to a great injustice, by the Dash criminals. His Eminence recommended all, especially believers, tribal chiefs and others to be proud of them and respected them, and honoured them.

Please have a look at Sayyed Al-Hakeem’s website to know more about his inspiring life. 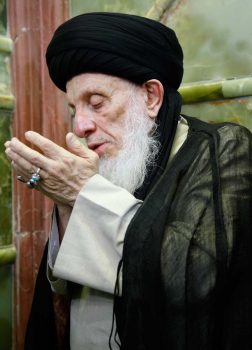