President of CoEJ wishes us all a very Happy New Year

Tonight, from Sweden to Switzerland, from Paris to Peterborough and across all Jamaats in Europe, Our Sisters and Brothers will gather with family and friends to celebrate the holidays and reflect on the accomplishments of 2021. While we countdown to midnight, we look forward to a new year and a new decade full of promise and hope InshaAllah.

This year has been challenging for many of us. We have experienced a global pandemic that has threatened our health, our economy, and our very way of life.

Through the mental, physical, and financial toll of these past 12 months, we have also seen our community members show strength, resilience, and a willingness to work together. Volunteers across Jamaats have taken steps to support their most vulnerable, families and businesses have made sacrifices to keep others safe, and everyone fought for a better, fairer future for everyone. These actions should inspire us all as we move into the next year.

Two months ago, I took up the presidency of The Council of European Jamaats after the successful Annual General Meeting in Peterborough.

I have since had the opportunity to meet with Jamaat Leaders at the Presidents’ Summit held in Milton Keynes. I have gone through each and every Board we currently run at CoEJ in order to set a vision for the term 2021-2024 and appoint a lead that can take the work we do to new heights.

In the next 3 years I will keep emphasizing on the importance of “Thinking Big” as a community. The magic of thinking big can widen the horizon of our community, and bring us greater opportunities and greater success.

It is you, who sets limits on your thinking. You can break beyond the limits you are putting on yourself, by thinking big.

We held our first Executive Council Meeting in Leicester where I was fortunate to meet some of the councillors physically and others online as this was a hybrid meeting.

In December, I travelled with my team to Dubai for the 1st World Federation EXCO meeting where I had the pleasure to meet with the WF President Br. Safder Jaffer and his Office Bearers. We discussed various challenges we are facing at CoEJ and the Region and possible future solutions in partnership with WF.

As we wrap up this year and move into a new one, I invite all members to reflect on all that we have learned about ourselves – our perseverance, our ingenuity, and our compassion for others.

This new year is also a reminder and commemoration of the days of Ayyam e Fatimiya for our Lady of Light Fatima Zahra (a.s) to recall her virtues, moral and ethical examples as well as her suffering and rededicate to lead our lives guided by her as a role model.

Now, as we look to the opportunities that await us in 2022, let us all continue to build a community that is stronger, fairer, and more equitable for everyone. 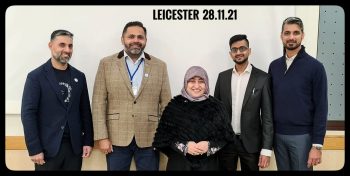 The Council of European Jamaats held its Executive Council Meeting on Sunday 28 November 2021 at KSIMC of Leicester. The Council was appreciative of the gracious hospitality provided by Leicester Jamaat. The hybrid meeting was attended by 31 Councillors of which 18 were in person including from Paris and Switzerland. Alhamdulillah, it was a fruitful meeting, giving an opportunity to discuss many important matters such as the vision of the Office Bearers and purchasing of 23 Estreham Road. In addition, the following eight were elected as Councillors to the WF: 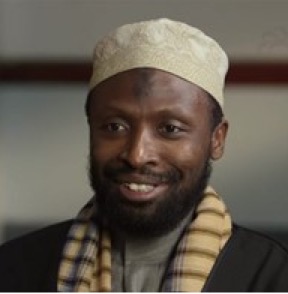 Sheikh Nuru Mohammed has been nominated as UK’s most Impactful Imam 2021 at The British Beacon Mosque Awards. The awards took place on Saturday 04 December, with Sheikh being selected from a list of influential scholars from across the UK.

Sheikh Nuru has played a significant role in the development of our Community globally. He is currently the Resident Alim for KSIMC of Birmingham since 2016.

Born in Ghana, Sheikh holds a BA in Islamic Philosophy and Mysticism from Al-Mustafa International University in Iran, an MA in Islamic Studies at Middlesex University and is a visiting fellow at Cambridge University. Sheikh is also a qualified civil and commercial Mediator and is the Chair of the Islamic Cultural and Religious Affairs (ICRA) of CoEJ.

In addition to playing a significant role in the development of our Community, Sheikh has played an active role in the wider society, particularly in Birmingham where he resides. He is the co-chair of Citizens UK Birmingham and a Trustee of Citizens UK. He is also a Governor at a local Secondary School and a member of the Standing Advisory Council on Religious Education in Birmingham.

Sheikh has played an active role in encouraging others to take up the Covid-19 Vaccine, and was interviewed by a large number of journalists over the recent months. 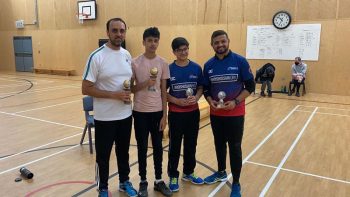 Aarif and Suhail Merali versus Arif and Mohammedali Chandoo 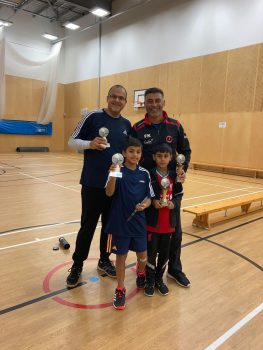 STANMORE JAFFERYS Keeping it in the Family!

We always knew -from its inception – that the Father & Son concept would prove hugely popular, and our anticipation was rubber-stamped by the fact that there were waiting lists for both age categories. Indeed, 40 pairs in each category had signed up. These had to be whittled down to the last 16, 8, 4 and then 2 finalists.

DAY 1 & 2 GROUP STAGES
As dads and boys arrived and registered, the hall filled with excitement, camaraderie and banter. Everyone was keen to get on the courts as soon as possible.

After a short briefing detailing covid safety measures and rules of the game, the matches started. Rackets were raised and ready, players were bouncing ‘on their toes’ and soon the shuttles started flying. Shouts of ‘yours’ and ‘mine’, words of encouragement, fist pumps and high fives between dads and sons – it was a lovely show of bonding.

Once all matches were complete, the task remained to work out who had made it through to the knockout stages to be held the following week. Coordinators, armed with score sheets, calculators, pens, highlighters and most importantly coffee, spent the morning tallying and totalling scores. Sworn to secrecy and refusing tempting ‘bribes’ to release the names of the last 16 early, we knew that the day of the finals was going to be something special!

DAY 3 FINALS DAY
As the last 16 pairings from both age categories arrived with their cheerleaders (spectators were invited to watch), there was a certain tension in the air. It was now getting serious. Who was going to take home the silverware? As the trophies were displayed there were palpable gasps of awe from the mouths of the younger players. Each player was going to give it their all to try and win one.

Umpires were assigned their courts and handed their clipboards. Warm up stretches were done and soon, everyone was ready to get smashing.
Mandazi and Chaiiwala chai were the refreshments on offer and these went down an absolute treat with some admitting to drinking 3 cups (the reasoning was that it calmed their nerves).

As the semi final games ended, 3 of the 4 courts were packed away and benches were placed around the finals court. The atmosphere was more electric than when England reached the final of Euro 2020! The umpire took his position and invited the finalists of the age 11-16 category onto the court. These were Aarif and Suhail Merali versus Arif and Mohammedali Chandoo.

It was a nail-biting final – both pairs were evenly matched and the scores climbed in tandem. After reaching deuce at 20-20, 2 clear points were needed for the win. Both pairs fought hard, with a stunning smash by the Meralis that finally clinched it!!

As the crowds rejoiced with the winners, silence had to be called for once more, as the finalists from age category 6-10 were invited onto court. These were Fayaz and Husayn Kermali and Mustafa and Javadali Muraj. It was 10.15pm but both 8 year old boys were full of energy and adrenaline.

The display of skill was amazing to see in players of such a young age. As one boy returned a smash played by the opposing father, the crowd went wild! Both boys were sliding and diving around the court to reach shots. One can only say this is down to the agility and blessings of youth! Husayn played a beautiful net shot that teetered on the tape of the net for a split second and then dropped down on the other side. Once more, the crowd went wild!

The match was stunning to watch till the final point, and Fayaz and Husayn Kermali were crowned as champions. As each pair was called up to receive their trophies, there were broad smiles all around.
Words of encouragement were spoken by Shafique Govani, Chairman of Stanmore Jafferys and by Mohammedali Datoo, Head of SJ Racket Sports.

Once again, we thank all donors, volunteers and organisers for their dedication in making this tournament a success. A special shout out to our SJ youth badminton coach, Keith Burns of ABC Coaching, for his input and help throughout. 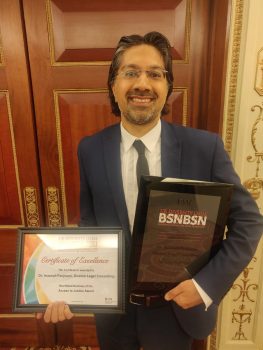 On 30th November 2021 at Plaisterers Hall in London, the UK Diversity Legal Awards (https://diversitylegalawards.org/) recognised Dr. Imranali Panjwani’s national and international work in the field of immigration and asylum law – in particular his country expert reports to enable asylum seekers the right to stay in the UK and research which argues for greater legal representation for minority groups.

They awarded him and his consultancy, Diverse Legal Consulting (https://www.diverselegal.com/), the ‘Highly Commended Award for Access to Justice.’

Dr. Imranali Panjwani, the Founder and Head of Diverse Legal Consulting and a Senior Lecturer in Law at Anglia Ruskin University commented,

“It is an honour to receive the Highly Commended Award for Access to Justice which more importantly recognises the plight of asylum seekers who flee persecution from their own countries and require our legal, social and moral support. I thank God, my dear parents, wife and children for their constant support without which my humble contribution in the field of immigration and asylum law and human rights would not be possible.

Anyone of us can experience injustice and being ostracised by others but imagine when your life, family, shelter and livelihood are under constant persecution; what would you do to protect yourself and loved ones? If we can just pose ourselves this question daily then perhaps our laws and judgements on those who we perceive as the ‘Other’ would change drastically. Ali, son of Abu Talib, the cousin and son-in-law of Prophet Muhammad and a just leader in 7th century Arabia stated:

‘Justice is the support of the citizens & beauty of the rulers.’

Perhaps this is the task that lays ahead of all of us, God willing.

Congratulations to all the winners and nominees;

Thank you to Fountain Solicitors, Roelens Solicitors and Latitude Law for recommending me;

Thank you to Anglia Ruskin University for their encouragement;

Thank you to UK Diversity Legal Awards – may your important work in recognising diversity, inclusion and equality across the legal profession continue. May God bless you all.”